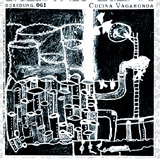 A year after the releasing of the first compendium, Ogredung proposes you a release even more surprising and passionate than the succesful Snowsky. Without replicating modules and strategies, our audacious experimentators reveal themselves as endowed with an outstanding creativity. The tasty carnet of contributors spaces in a variety of styles and tendencies that go from Paolo Veneziani's (Tibprod, Cobalt) neo-cosmic sounds to Puyopuyo's (19-t, Gagarin) fierce weirdo-synthpop, without losing sight of the common path that leads the whole work: autumn. Enwrapped by the delicate parfumes of Imtech's (Observatoryonline) autumnal whispers, Urkuma, Phobode and Strinqulu's (MikMusik, Merck, Saag) sonorous poetry and Kaneel's (Camomille, Kikapu) nostalgic dronebeats, we are kicked up by Makunouchi Bento's (Retinascan, Inpuj) subtle elaborate of obscure flows and the hypnotic hug of Luca Confusione; and still, Iermoç and Transient's (Koept, Hippocamp, Monotonik, Skylab Operations) quasi-obsessive IDM-intricacy, Vizion's (Monotonik, Camomille, Wikkid) determined melodic moments and Proswell's (Merck, Civik, 19-t) top electronics. A live recording of Corkzal's (Commie) perfectly closes the circle.

The release is also available as cd-r.

Reviewer: purusha - favoritefavoritefavoritefavoritefavorite - November 1, 2004
Subject: Boban Ristevski / Vital Weekly
Now we're entering the world of idm melotronics. And it's a nice
place to be. Often without much gravity. 1, 2, 3, no gravity... You
know that great track from Closer Music / Kompakt? Probably the best
non-idm track that should have been released by a devoted idm label,
or should have been a part of some killer-idm compilation. I don't
know if Ogredung are releasing some specific sound as a label,
because this is the first release I've heard from them (and they have
more than 60!), but the sound of their Cucina Vagabonda (is it
Kitchen Vagabonds??) compilation is very much in the deeper idm
areas. The compilation is available in 2 formats: mp3s from their
site, and CDR with a handcrafted cover (which can be ordered), but
they still haven't decided about the definitive design, so my copy is
a unique prototype. Looks nice.
I started listening this compilation from the 8th track, that's
Imtech aka Quim, known from his brilliant EP on Skylab Observatory.
It's great to know more labels are releasing Imtech's music, and the
track here is another proof of it's constant quality. There are many
bedroom producers who make idm music today but not too many manage to
create distinctly personal sound. Imtech is good at that, and you
should know a compilation is worth checking out when he's there.
Iermoc leaves nice impression too, background synth-sounds that
develop the melody with the crunchy rhythm. Many of the tracks are on
the crunchy lo-fi side. There are many un or at least less known
artists on this compilation like Kaneel, Luca Confusione, Urkuma +
Phobode + Strinqulu, Makunouchi Bento, Paolo Veneziani and the
others... They all cook different and tasty food in their kitchens,
with Imtech probably being the main chief, at least for me.